I pledge, if necessary, to join others somewhere along the route of the Bakken Pipeline to engage in acts of dignified, peaceful civil disobedience that could result in my arrest in order to send the message to stop construction of the pipeline.

The potential trigger for our Bakken Pipeline Pledge of Resistance is if work begins in earnest on the Bakken Pipeline across Iowa, which became a reality on Monday, June 6 when the Iowa Utilities Board voted 2-1 to authorize construction. (1)

Click here to chip in $5, $8, $20 or whatever you can to support the Bakken Pledge of Resistance. 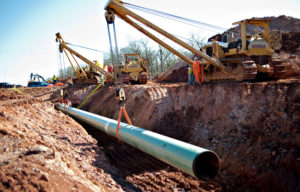 We’ll need many volunteers to help organize these actions, and funds to help produce trainings so local leaders and activists can get the tools they need to organize an action near them.

The most important thing for our Pledge of Resistance is that all of us are ready to spring into action when needed, and that the threat of mass civil disobedience to block the Bakken Pipeline becomes credible, known and continues to grow.

Over the past two years, landowners, farmers, tribes and environmentalists have done everything possible to stop the Bakken Pipeline through legal, legislative and official means, and through all types of public actions — including a Spirit Camp blocking the pipeline created by the Standing Rock Sioux; a 500-mile relay run organized by Lakota youth; a 400-mile walk along the length of the Iowa stretch of the pipeline by Bold Iowa director Ed Fallon; and numerous actions by Iowa CCI and the Bakken Pipeline Resistance Coalition.

Iowa Citizens for Community Improvement (ICCI) and CREDO have signed on to support the Pledge of Resistance.

These and many other community actions have continued to erode public support for the pipeline. There remains the report by the Army Corps of Engineers on how the pipeline could affect certain key crossings along the proposed route. (2)

Also, various legal challenges have been filed, including by landowners challenging eminent domain for private gain (3), and the building authorization that was revoked by the Army Corps in relation to the discovery of a sacred Native burial site on the proposed route. (4)

We are at the point where men and women of conscience must step forward. In the tradition of other great American struggles for freedom, from the Boston Tea Party to the March to Montgomery for Voting Rights, to the Farm Crisis when farmers stood with their neighbors to block foreclosure auctions, we are asking people to stand for what we believe is right through acts of nonviolent civil disobedience to stop the Bakken Pipeline..

We ask you to commit, should it be necessary, to engage in serious, dignified, nonviolent civil disobedience that could get you arrested.

Specifically, we are asking you to pledge, if construction of the Bakken Pipeline begins across Iowa, to either:

If you are able to pledge to participate in taking direct action, it is impossible to say exactly where our action will be most needed and most effective. This is and will remain, by design, a moving target. If you are able to commit to risk arrest during an act of nonviolent civil disobedience, we ask you to sign this pledge with the understanding that, when called upon, you will do everything possible to join the landowners, tribes, and others who are in this fight for the long haul.

If built, the Bakken Pipeline will produce carbon emissions equivalent to fourteen new coal-fired power plants. If the pipeline breaks and leaks (it’s really just a matter of time), it will occur in the Mississippi River watershed, which is the water lifeline for a huge portion of our country.

This decision affects all of us, wherever we live. So we want to engage everyone who cares about protecting our land, water and climate to join our efforts to stop the Bakken Pipeline.

You shouldn’t make this pledge lightly. We certainly don’t ask lightly. We ask in the belief that there are tens of thousands of people out there who feel as strongly as we do, who believe that these circumstances call for extraordinary action, and who want to be part of that action in their community.

And we ask with the faith that those who commit to participate and organize actions will participate only in the most dignified manner.

After all, we are the conservatives, standing up for a safe and secure future for our families. It is those we protest, those who profit from poisoning our water, who violate our property rights, and who are radically altering the chemical composition of our atmosphere — and the prospects for survival of humanity — that are the radicals.*

If you are moved — we ask you to take the pledge.

2. “Why the Iowa portion of Midwest oil pipeline could be delayed,” Christian Science Monitor, 5/22/16.

*Many thanks to our friends at CREDO who organized the Pledge of Resistance against Keystone XL—the Bakken Pipeline pledge borrows liberally from their work. 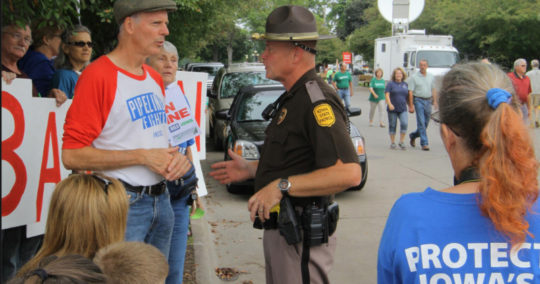